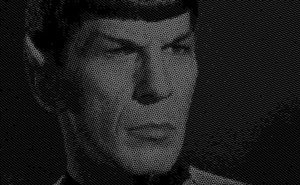 The 6th meeting of the Recreational Computer Programming Group was held on June 9th, 2013 at Houston's hackerspace, TX/RX Labs.

Chris Ertel presented an interesting web app from the Multi Robot Systems Lab at Rice University which allows you to control a simulated swarm of robots to perform various tasks.

Steve Cameron (that's me) presented an implementation of Jeremy Van Grinsven's idea to make a software crosshatching algorithm. The algorithm works by producing several layers of parallel lines, each set of parallel lines rotated to various angles over the source image. Each line is drawn as a series of very very short line segments. For each line segment, the underlying source image is sampled, and if the corresponding location on the sourceimage is "dark enough", the line segment is drawn, otherwise, it is omitted. For each layer of parallel lines, the "dark enough" threshold is raised. This seems to be enough to produce a reasonably good looking crosshatched image. Jeremy also took the output of my algorithm and executed it in a laser etching on wood to produce a fascinating image of Spock, from the original Star Trek TV series.

I also briefly presented my ongoing progress on my video game, Space Nerds in Space, specifically progress on the software 3d renderer, asteroids, and the implementation of a 3d "starfield" effect.

Mark Sullivan presented some ideas about how some of his CAM software for computing tool paths from CAD designs worked, and in some cases didn't work, and we discussed various approaches to the problem, and speculated about what might be going wrong in those cases which didn't work right. I don't know that any real progress was made on the topic, but it was an interesting and informative discussion nonetheless.

The next meeting of the Recreational Computer Programming Group will be held July 14th, 2013, at 1:30pm at TX/RX Labs.