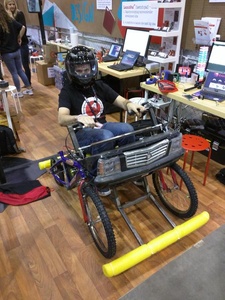 TX/RX Labs and Texas Instruments have collaborated on building an entry for the Power Racing Series, which competed at the 10th Annual Bay Area Maker Faire in San Mateo. The vehicle is based on TI's Launchpad microcontroller ecosystem and was built in Houston by TI and TX/RX engineers. The Power Racing Series invites hackerspaces and likeminded teams to modify Power Wheels ride on toy cars and race them. In this video, Trey German explains the project.

For a detailed writeup check out Trey's posts on TI's Launch Your Design Blog: