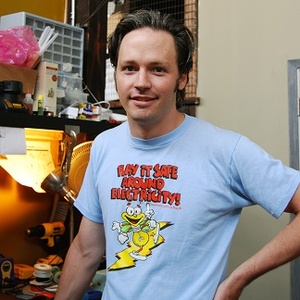 Charlie Larrabee is attempting to do something most makers dream about. He is trying to turn his passion for making, in the realms of circuit design and music, into a real business. He recently left his job as circuit designer in the oil business to design and build vacuum tube based audio amplifiers on a full time basis. This strategy also allows him time to pursue his second career as guitar player with Houston based garage rock band Born Liars.

Charlie feels that his prospects for making a successful go at this new venture are good. “I’ve been designing and building tube amps from scratch for about 7 years. Over that time I have a few prototypes that I am excited about and I want to take those forward to a manufacturing process,” he says.

Charlie’s passion for tube amp design was born out of his need to solve a real world problem. As a guitar player, Charlie needed an amp to use during live performances. But he was not happy with mass market amplifiers offered by large companies, so he decided to design and build his own. He says, “To a big company, the only way they are going to market an amp to a lot of people is to cram all these features into one system. Then what you have is basically a different circuit and you’re no longer just getting that one sound. You have a lot more interactions between the parts that are unplanned.”

For his designs Charlie favors a simple approach. “My thinking is that somebody needs to take a step back and just make that basic system that is going to sound a certain way and market that to musicians. That would not be feasible for a big company, but somebody small might be able to do that. My goal is to come up with designs that sound good to me. That’s the only thing that I can do really well, rather than try to guess what somebody else would like. I just try to make the best sounding thing that I would want, then I hope to pass that on to another musician who would want to use it as well.” Charlie first visited TX/RX earlier this year and quickly decided to rent a workbench and make it home for his operation. He says “The timing for me personally and the availability of the shop was really excellent. I am actually able to spend tons of time here and just concentrate on my project.” He treats this project as a regular job and spends weekdays at TX/RX working on his amplifier designs.

So Charlie is endeavoring to fill this market niche. He is in the process of investigating the business side of making and selling tube amps. “My goal right now is to have my 3 prototypes at a finished stage, have all the drawings finished and have a method for how I am going to get them manufactured by the end of the year.”

Charlies 3 prototype designs include a 50 watt amp for large venues, a 3 watt practice amp intended for apartment dwellers and a 30 watt stage amp which he plays at gigs. More details about his prototypes are available at larrabeeinstrumentlaboratory.tumblr.com His next show with Born Liars is Friday, October 17 at Fitzgerald’s.