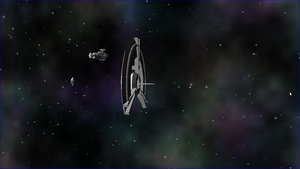 This past Sunday, September 8th, 2013, the 9th meeting of the Houston Recreational Computer Programming Group was held at TX/RX Labs. Patrick Wheeler discussed stream processing with pull based acyclic graphs using the Pipes package in Haskell. There was some discussion about how this way of doing things might be compared to using coroutines or function pointers and context cookies in procedural languages such as C, and how a primarily audio mixing program such as Be The Wumpus (see below) might potentially be rewritten in Haskell using Pipes. Interesting, though possibly a bit mystifying as well, due mainly to the audience's infamiliarity with Haskell.

Steve Cameron [that's me] discussed a couple of his projects. The first was Be The Wumpus (now hosted on on github), a purely audio game, or rather more of a novelty than a game, in which the player assumes the role of a Wumpus, a blind cave dwelling monster who subsists on meals of unlucky cave wanderers which he locates (and eats) by sound alone. The heart of the program is a stereo mixer using the portaudio library which adjusts left and right volumes of stereo sound recordings based on the positions of the source entities from which those sounds are ostensibly emanating.

The second project was a very simple space skybox creator Cosmic Space Boxinator. It draws stars and a nebula onto an unfolded cube in such a way that when the cube is folded back together, the edges of the images painted on the interior faces match seamlessly where they join. The idea is this box is to be used as distant scenery in a space game, such as Space Nerds In Space. More details about Cosmic Space Boxinator can be found on Steve's blog post about it: OpenGL Skybox in Space Nerds In Space.

The next meeting of the Houston Recreational Computer Programming Group will be held on October 13th, 2013.