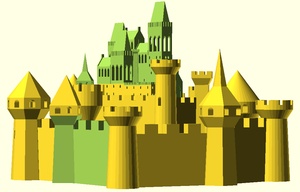 The third meeting of the Recreational computer group took place today, March 10, 2013, and was well attended. Edwin G. presented some slides about the ant colony optimization algorithm which has applications in scheduling, routing and other areas. He also presented some information about the Maven build system used by the Apache project. Marlin Mixon showed us his html5/canvas implementation of a game called Floodwar, in which players (one of which may be the computer) select elements of a colored grid to capture connected grid squares of the same color in an attempt to win the game by acquiring a majority of the terriitory. Steve Cameron (that's me) presented a stochastic 3d castle model generator implemented as a C metaprogram which outputs an openscad program to create the castle model.

The next meeting of the Recreational Computer Programming Group will be on April 10, 2013.