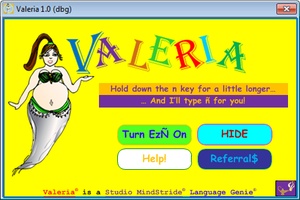 Master typing world languages on your keyboard with the help of Language Genies. This Windows application uses standard keyboards to type special characters without having to use complicated key combinations to type single characters. Languages Genies works by simply holding down existing keys a little longer to create new characters. For instance, in Valeria, the Spanish Letter Genie, a long-press of the 'n' key will produce the 'ñ' character.

Dan Mailman, the creator of Language Genies, is a computer scientist, linguist, inventor, translator, editor, and TXRX Labs member. Share this project with others by visiting www.languagegenies.com.