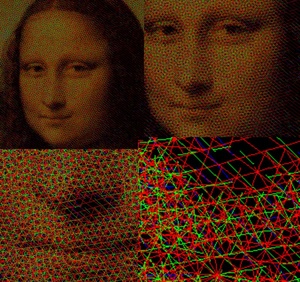 The August 2014 meeting of the Houston Recreational Computer Programming Group was held this past Sunday, on the 10th. Pretty good attendance this time, as has now become rather usual. Last month, I failed to provide a writeup for the July meeting, so that is included here too, below. Here are some slides from a presentation about how planetary rings and associated shadows are rendered in Space Nerds In Space that gives a bit more detail (use arrow keys to navigate, press F11 for full screen.)

I am very late in writing up the July 2014 meeting. Let me rectify that now. Here's what went on at the July meeting.

Stephen Cameron showed a ReactionDiffussion simulation written in Processing and based on a reaction diffusion tutorial by Karl Sims. It models a system of two virtual chemicals, A and B reacting and diffusing on a 2 dimensional grid. The 'A' chemical is added at a given rate. B is removed at a given rate (as if evaporating) Two instances of 'B' combine with 'A' to produce a three instances of 'B', as if B uses A as food to reproduce. Both chemicals diffuse through the grid, but A diffuses faster than B.

For each grid cell in the simulation, 2 numbers are tracked, which represent the concentrations of each chemical at that location. These concentrations are updated according to the Gray-Scott model:

New values, A' and B' are computed as follows:

Da and Db are the diffusion rates of A and B, and are 1.0 and 0.5. f is the feed rate of A, and is 0.055. k is the kill rate of B, and is 0.062. DeltaT is 1.0; The convolution matrix used is a 3x3 matrix: The grid is initialized with A = 1.0 and B = 0.0 and them some small areas may be seeded with B = 1.0. It is very sensitive to the feed and kill rates. It so happened that Chris Cauley did some work in this area in grad school, and so he explained a bit about how the values of the convolution matrix were arrived at and why this was equivalent to some other means of solving the differential equations, but the details of this explanation now escape me. Above, some output of the reaction diffusion program.

Stephen Cameron also showed an enhancment to his crosshatcher program to produce RGB images in addition to black and white images.

The algorithm works by producing several layers of parallel lines, each set of parallel lines rotated to various angles over the source image. Each line is drawn as a series of very very short line segments. For each line segment, the underlying source image is sampled, and if the corresponding location on the sourceimage is "dark enough", the line segment is drawn, otherwise, it is omitted. For each layer of parallel lines, the "dark enough" threshold is raised. This seems to be enough to produce a reasonably good looking crosshatched image. To extend this to work with RGB, three sets of layers are computed, one for each color, red, green and blue. Each color layer is significantly rotated relative to one another. The "dark enough" criteria is confined to a single channel, red, green or blue, but otherwise is identical to the black and white case. Some sample output: Above, the same image at several magnifications

Ru presented some work he has done while in the process of penetration testing some device firmware to add support for a rather esoteric microprocessor (exactly which one I forget) to the IDA debugging and decompiling software. I'm afraid I cannot provide more details about this presentation. Guess you had to be there.

Chris Cauley presented some work he did with a Javascript implementation of OpenSCAD to produce some 3D printed parametric flexible snakes. More info about the 3D parametrix flexible snakes maybe found here.