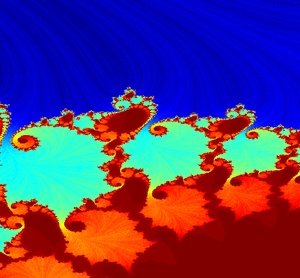 Stephen Cameron and Jeremy Van Grinsven talked about how they used quaternions in the game Space Nerds in Space to represent the orientation of objects within the game as well as rotations and incrementally applied rotations. Quaternions are a mathematical construct represented by four floating point numbers, three of which encode an axis about which rotation occurs, while the fourth encodes the angle of rotation about that axis. If a vector, x, y, z represents the axis of rotation, and an angle, theta, represents the angle of rotation, the four components of the quaternion are computed as follows:

The details of how the encoding is done, or why it is done the way it is done are not necessary to understand in order to be able to use quaternions. Any accumulation of of any number of arbitrary rotations about a single point may be represented by a single quaternion.

What makes them useful in applications like computer games is that consecutive rotations may be accumulated by multiplying quaternions together. And a rotation may be transformed into the coordinate space of another arbitrarily rotated object easily.

these functions are most of what you need to model the motions of say, a spaceship in a 3D space game.

Next up, Adrian Garcia is working on a Mandelbrot set generator/explorer in Matlab, and in particular is trying to optimize it to allow smoothly diving down into the set. The current version can either over generate the matrix (slowing down the generation step) to achieve a high resolution dive, or have a fast generation and a pixelated dive, and can not be easily optimized between the two. He came to the Recreational Programming Group to get feedback and advice on different approaches to to improve the program to the point of being able to continuously dive with a reasonable resolution and generation time. He tells us he left satisfied. Now he just has do it.

The next meeting of the Recreational Computer Programming Group will be on December 8th, 2013.