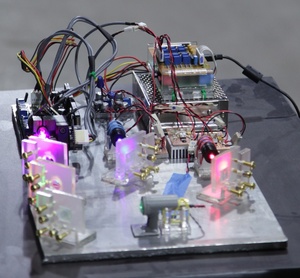 If you missed the open house this past Friday night (02/15/2013) at TX/RX labs, you missed a good show. Jeremy Van Grinsven brought in the RGB laser projector he's been working on over the last month. The projector contains three lasers, red, blue and green. The beams are conjoined by sending them through, or bouncing them off dichroic mirrors -- mirrors which either transmit or reflect light depending on the frequency of the light. Once conjoined, the beams bounce off two galvanometers, which are mirrors mounted on motors that vibrate similarly to the voice coil within a loudspeaker. The mirrors are controlled by the amplified signal emanating from a sound card -- so the left and right channels of a sound card control the x and y deflection of the conjoined beam.

On the software side, the openlase library is used to map familiar line drawing primitives (lines, circles, etc.) to sound card output. From there, it was an a fairly easy step to adapt Word War vi, a vector based graphics game by Steve Cameron (that's me) to work with the projector -- the main thing which needed to be done was to remove and simplify things to meet the laser projector's line budget, as it is relatively slow compared to a raster graphics display. Additionally Laser Lander, a lunar lander type game, was hastily written with the laser projector expressly in mind.