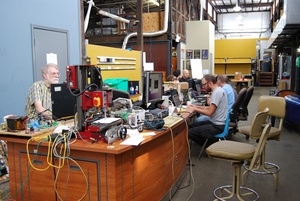 Each year developers and enthusiasts from across the country gather for LinuxCNC Fest. This year the event is being hosted at TX/RX Labs.

LinuxCNC is an open source framework for building machine controllers for controlling machines like mills, lathes, 3d printers, laser cutters, routers and edm machines. Essentially, LinuxCNC provides the final step for the conversion of CAD drawings into finished parts, made of metal, wood or other material. The original codebase for LinuxCNC was based on a project by the National Institute for Standards and Technology (NIST) developed in 1993. The NIST project was an effort to develop a standard GCode, an instruction set cnc machines rely on to dictate their movements and operations.

LinuxCNC Fest 2014 gives participants a chance to meet face to face and work on tasks which require prolonged focus and concentration, something which is difficult to come by given that all developers are volunteers who work on LinuxCNC in their spare time. Seven developers and users have gathered at TX/RX Labs for the event. This week they are mainly working on designing a new api for one of LinuxCNC's internal interfaces to replace some messy legacy code. This concentrated work period gives LinuxCNC developers a chance to do redesign work which that they rarely have the opportunity to do.

Attendees and members have also made time to work on some of the labs cnc equipment. This progress would not have been completed without the expertise of this week's guests. LinuxCNC Fest 2014 continues at TX/RX Labs through Friday, October 24.